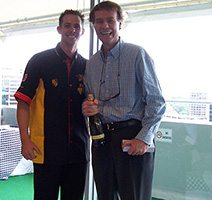 Luke Youlden won the Australian Formula Ford championship in the year 2000, and was immediately thrust into the limelight as Russel Ingles, Perkins Motorsport co-driver in the V8 Supercars series endurance events and Bathurst 1000. Since that time Luke has been the go too co driver for the best V8 Supercar teams in the country, culminating with his win at the 2017 Bathurst 1000 with David Reynolds and the Erebus race team.

Luke speaks from the heart on the commitment and sacrifice that is needed in a lifetime to reach the highest goals. Luke may have won Australia’s greatest race, reaching speeds of 300kph, but it hasn’t come easily.